Rails and their close relatives, crakes, are rather small birds, but big in sound.

They tend to have rather narrow bodies, ideal for creeping through dense herbage – usually the sedges, rushes and reeds of emergent vegetation on the edge of ponds, bogs, or marshes and damp meadows. And they are masters in the art of remaining hidden.

The most widespread member of this family in the UK and the only year-round resident is the Water Rail Rallus aquaticus. Mysterious, skulking, elusive and fascinating. A sleek velveteen mauve flush on face and breast offsets the darker chocolate-streaked back, dandy stripes on the flanks and a bill the colour of ripe hawthorn berries. 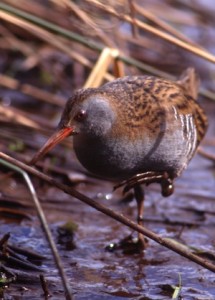 In my area of north Northumberland water rails are rather scarce. But I’ve found a small bog where a few turn up every year; and sometimes they spread to a couple of small reed-fringed pools nearby.

I’m pretty sure they disappear from these spots in winter; it’s difficult to see how they could survive in these places once a freeze sets in and I’ve come across single birds poaching among the willow roots and reed stems along the banks of local rivers during the winter months. Birds often turn up at unlikely places, such as garden ponds, during spells of harsher winter weather. They also become bolder and emerge from the vegetation into the open more when frost forces them to be more wide-ranging in their search for food. And this is when birders get most of their actual sightings of the bird.

Because they are masters of stealth, they have become known for their calls and particularly their weird display calls, known as sharming.

Now only found in the north-west of the UK, mainly the islands of the Hebrides. More widespread in continental Europe. Corncrakes disappeared from much of Britain in the mid-20th century, particularly with the farming changes around the time of the second world war. Until then it was a well-known resident of farm grasslands and damp pastures. Referred to by Gilbert White and other older writers as the land-rail. Scientific name is entirely onomatopoeic, rather than etymological: Crex crex.

This was probably the densest population of corncrakes in Britain at the time, and may still be; recorded on Tiree at around midnight in early July 1995.

Spotted crake is drawn to wetter marshes than corncrake, but tends to avoid the taller vegetation of reedbeds where the water rail might be found. They’re a scarce bird in Britain. A few pairs breed most years and others call in on passage. But in Spring a singing male can turn up in a marsh virtually anywhere. They’re Europe’s sound-alike to the whiplash birds of Australia.

Fairly common throughout Britain and Europe, though wild birds (away from parks) can be shy.

Common on ponds and lakes throughout lowland Britain and Europe.