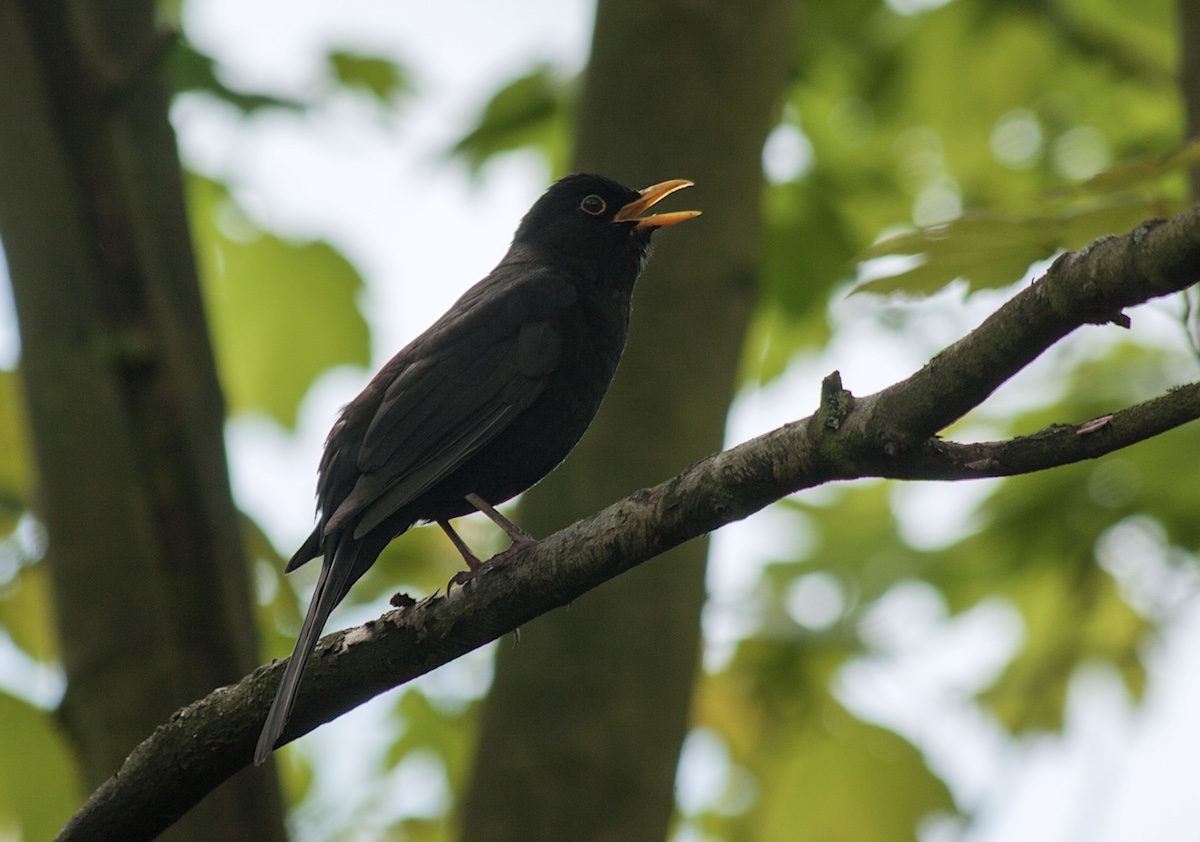 Notes for Katrina and Mike.

BBC blackbird
Where the conversation started. An anonymous blackbird from the BBC.

On first listening to the BBC bird, it reminded me of this Wyre blackbird. This has gradually become my reference on the simplest form of blackbird song: it’s uncluttered in structure tending to a single short whistled motif ending in a brief terminal twitter. And he has a tendency to repeat a particular motif, with just a little variation. There’s hardly any sign of a repertoire to show off.

I was pleased to get this recording at the time, valuing it for that simplicity, and assumed it was probably fairly standard early season song (28th March); I wonder now if it wasn’t a first-year bird coming into his first song season, in the early stages of developing a repertoire with few tutors around. It strikes me now as very rudimentary, having listened to many other singing blackbirds over the years and considered their recordings; so, full song maybe in tone and loudness, but it’s structurally undeveloped.

Actually the BBC bird has a wider repertoire, but while singing structurally fairly simple songs at a relaxed pace, has more developed phrasing than the Wyre bird.

Something like this Tankerville bird from 2009, though he has a more urbane delivery – jaunty, a little more full of himself, with a risqué sense of phrasing. But there’s something of a relaxed air, maybe reflective of late season song.

Not the greatest of recordings, but it was the beginning a period of recurring interest in the blackbird phonological traditions around my home at 20 Tankerville Terrace, an area with a dense blackbird community during the following years. So I did a fair bit of recording ‘for the record’.

This bird, singing from the gutter of my house, late in the season, reveals some of the motifs that became familiar to me in later years, though in rather basic, melodic renditions; which is not intended to undermine this bird’s worth as a singer – he has a powerful blend of repertoire, phrasing and animation that flows at an easy pace but is deceptively quick. A songbird in his prime.

My reference recording. Or one of them.

This is a blackbird recording I tend to return to alot. Partly because it’s a close, clean recording with just a hint of ambience and context, but also because his singing style is in a middle area for blackbird variation. He’s fairly busy, in a lively tempo, has quite complex phrasing, some very drawn out; a typical rural-suburban garden bird. Not quite tuneful; rather modernist in his sense of melody. Also you can hear some interplay with his neighbour further away up the wood.

It also happens to be part of his first song session of the day: I was waiting for him to arrive on his usual fence-post. So it is a recording of a performance by a bird the context of which I have reasonable data. It’s a good fixed point to give a measure of blackbird song variation.

Back to Tankerville and 2014. This bird caught my attention because he was singing from the end of our back garden and because he had one very distinctive signature whistle, which he liked to repeat two to three times. I felt that I recognised this bird through the following years to 2017 by this motif and several others; and while it could have been that a new bird picked up these motifs, as they did change a little over the years, but I don’t think so. He had character quircks. Listen at 0:23 and you’ll hear why I called him djewi. That’s a 2-time repetition; listen at 3:00 for him fully letting rip with it, becoming almost song thrush.

And I’ve subsequently heard a root form of the whistle from the 2009 bird above. But surely not the same bird all the way through the years 2009 to 2017.

He’s not among my favourite blackbird singers, clever rather than melodic; but he delivers with verve. And because I could recognise him, I came to develop a particular relationship with him. We knew each other: I could call him up when I went into the garden – but he never quite became tame. He was too smart; and though not big or outstanding looking as male blackbirds go, he was very self-confident and quietly alert.

This is my reference recording for the measured musical playfulness, which some male blackbirds get a thing for. But you have to listen beyond the foreground robin and passing calls, to him quietly doing his thing in the mid-distance.

If this had been a clean,closish recording of the blackbird, it would probably have been used a lot.

And to finish off the evening a couple of melodious singers. Both from isolated communities in the highlands. In fact close to the north coast of Britain, though each in a different community. Melodious – as a label for a particular branch of blackbird song style – slower, with clearly linked, tonal phrasing and a slightly plaintive or detuned air.

An isolated community around a coastal settlement.

And an isolated male, singing unseen from a scrappy plantation up an inland glen. Who was neighboured by ring ouzels and song thrushes.

My absolute favourite, but sadly a middle distance, windy recording.

Birds singing within this modality tend to be in rural areas, often one or a few scattered males in an isolated community. But I don’t think exclusively so. I suspect it may be something to do with increased male competition in more densely populated blackbird communities. But I may be trying to dump my own anthropomorphic intellectual baggage on the innocent merle.